Buckminster Fuller suggested that if a geodesic sphere were huge enough, the vast amount of air inside would allow for it to float up in the sky. Odd, yet mile-wide bubbles holding a thousand tons of water do just that.

The moon is also a giant orb that hangs up in the sky.

The vines on the wires, suspended by the tensegrity of wires and poles and sky and earth, cannot wave or move. They can only grow so far before they grow old and die, so they are effectively trapped wherever they are, subject to the forces of nature that rain down upon them.

Rain falls. Water tables are under-ground. Water flows thru and around every part of a living vine, and when you can’t move an inch, the gravitational tides of the moon hanging up there in the sky suddenly become very influential.

So the vines look to the clouds for rain, and the sun for food, and the moon for the dance. The vines hear the metronome of the seasons as well. The vines then form sphere’s themselves, taking the tensions around them to weave layers and pulp around seeds. But these vine’s spheres are not geodesic or floating in the clouds, nor anemochory like a dandelion on the wind, nor drifting like a coconut on the sea. No, gravity rules the seeds of the vine; the grape, save for the tensions of sunlight, water, and soil that work allochory magic greater than most any plant could dream of.

Grapes are sweet to eat and tasty to a great many creatures. Eat a ripe grape, and the seed is passed on thru to find a fertilized pile for a new home far away from the parent plant. Grapes also have yeast on their skins that converts sugar into alcohol. Pick a ripe grape, and the wine it forms may travel far, even over the sea to other continents.

And oddly, with a rare accord, those who encounter that far-traveling wine may come from however far away to gather the vine’s seeds, and even, indeed, gather cuttings of the vine to take back with them.

Thus a vine that can sprawl no father than a few meters can come to travel around the world, to look at new skies, new clouds, new light.

Not bad for a plant, but pretty standard for good art. 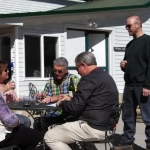 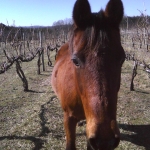