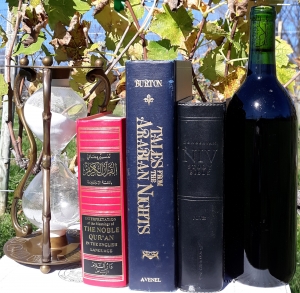 “With love and good will.”

My older brother Robert gave me a copy of “Tales of the Arabian Nights” back in the early 1980’s, and the Jinn were immediately added to my ongoing D&D campaign. Jinn are genies. Who hasn’t heard of genies? Even if your experience doesn’t extend beyond Ali Baba Bunny, Barbara Eden, or a big blue Robin Williams, you are probably still passingly familiar with the magical nature of the Jinn.

Ifrit, màridah, jinnis, jànn, djinn. Genies are supernatural beings who go by several middle-eastern based names. Hardly a night goes by without poor Scheherazade conjuring one up to excite her tales. One of the jinn magical hallmarks is time-bending, grand-scale magic. Nothing eludes their power, though mere mortals can seemingly escape their dubious wisdom. And they pop out of the most ordinary of things. No technological Tardis or finicky transporters required. Genie in a magic oil lamp for Aladdin and Daffy, or, for Sinbad and Major Nelson, genie in a bottle.

In time-traveling storytelling, an idea or object common to a particular society can be taken back in time to become problematic. McCoy’s gift of antique eyeglasses to Kirk, which Kirk then sells back to a merchant during a trip into the past, becomes such a causal loop artifact. Are there two pairs of glasses between the 1980s and 2280’s, or do the glasses only exist in this causal loop? A pair of Russian theoretical physicists named these time-breaking objects Jinn, in reference to the supernatural genie’s ability to appear or vanish into thin air.

Religions can share this same paradox. An idea from the future travels back into the past to create that future. Thus ensues the entire “Terminator” movie series as well. Do not confuse such a jinn with a temporal loop, such as Bill Murry’s “Groundhog Day”. Temporal loops are repetitive only to those affected, but such déjà vu can be potentially escaped to restore the normally progressing timeline. HAL-9000 resorts to murder to escape his programming loop in 2001. Unlike temporal causality loops, with religious causal loops, there is nothing to escape. The deity has created the proper timeline. A one-shot time safari in Ray Bradbury’s “A Sound of Thunder” accidentally steps on a butterfly while hunting dinosaurs and forever changes the future they return to find. That’s the kind of power that jinn have over time.

In my novel Tynged, the fledgling Catholic Church and the King of France are considering making secular wine illegal because they view it as a sin. Don’t laugh, the debate was as real then as the 18th Amendment became. The reader is the jinn in the story because they go back in time knowing that King Pepin & Queen Bertrada don’t succeed in pulling up the Loire Valley grapes that could have led to the wine Cabernet Franc. A third of the world still doesn’t drink today because Muhammad watched two of his followers have a drunken argument a hundred years before the Tynged novel even takes place.

Now, if you ask any good Muslim about jinn, they will tell you the Quran speaks of them. They see two types of jinn: hurtful ones that some would biblically call demons, and helpful or benign ones, closer to angels. Given the vast amount of American pop fiction devoted to angel/fallen angel/demon-driven storylines, they make appealing elements that add that Scheherazade magic, mystery, and good vs evil team conflict. Half-bred humans, with demons, angels, or gods, have been popular romping storylines for over two-thousand years. Just ask Antoine Galland. Adventure, romance, thriller, inspirational; all tales easily flavored with the supernatural.

Wine grapes revealed their jinn supernatural quality to our ancient ancestors. So many plants require cultivating both female and male versions of the plant to get a harvestable crop, including many table grapes, that it took our neolithic ancestors a long time to figure out how to farm them. Wine grapes were almost magically easy. The wine you like to drink comes from plants that are both sexes in every single flower. Take a single wine grape seed a thousand miles away and plant it, and you can get the grapes and wine you remember. Scoffing at the religious impropriety of two genders in one? Don’t eat corn, then. The male tassel at the top of the plant fertilizes the female silk on the cob below, and you get another row of kernels on the ear. Jules Verne has young Herbert find one kernel of corn hidden in his pocket seam, and 19th-century scientist Cyrus Harding realized, given a couple of seasons, they could make bread on their fictional island. Mysterious, indeed. Jinn seeds: magic fortuitously appearing out of the past.

In my Immortalize novels, Kabiri brings rare, deep red wine grape seeds across the Mediterranean from ancient Turkey to ancient Spain. There were already grapes growing in Spain, but most of the world’s grapes are not suited to making wine. Sweet to eat and make jelly, sure. Precious and few are those grape varieties that make fine wine. Kabiri brings a little godly magic with him, a jinn object out of the mysterious past that changed the events of the story in Spain, and then disappears in the Loire Valley of ancient Gaul. In the second novel, the antagonist Jiris calls Kabiri a jinn, a genie, because he does not understand where Kabiri’s black-wine knowledge comes from. He also wants to cast Kabiri as an evil half-demon in an effort to get Calom to turn against his master Phraortes’ wishes and solve Jiris’ problem for him. The deception is political cover for court intrigue. The black wine is a magic elixir of the past in the centroid of an evil-vs-good-vs-evil triangle. To give Calom the confidence necessary to face Kabiri, Jiris gives him a dagger with an exaggerated other-worldly past; a demi-god infused talisman to face the terrible genie. Repeat Perseus. Krull. Potter. Scotty gives the secret of transparent aluminum to its inventor; the ultimate jinn casual loop.

The wine itself must be a jinn. A seed gift from the distant magi of the Orient, come west following stars. A fruit that transcends all gender, and requires an exacting ritual to turn into a fragrant magic potion that bestows ancient wisdom, long sought by kings & gods. Your wine inherits the jinn’s uncanny ability to appear and disappear without a trace. Open Sesame! You ritualistically pop the cork to let the genie out. Magic ensues. The genie snaps its fingers, and you are granted the wisdom of the ages. Your bottle is suddenly, mysteriously, empty.

So, sit back and listen to trapped Scheherazade spin her temporal loop tales. Every night, she must tell a new tale interesting enough that her kingly master does not kill her in the morning. At least, until she eventually tells the right tale to break out of the loop to her freedom. Ponder your bottle, a vessel of imagination from the past. A causal loop artifact now, out of its proper time. Reflect upon yourself, and you may discover that you have become the jinn. 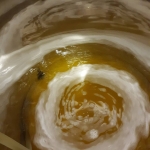 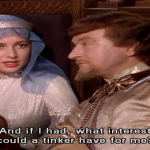