Tinkering. Verb. Definition: to repair, adjust, or experiment with. Archaic: the attempt to mend household utensils by a metal worker.

After four years of hard-at-it professional writing followed by a flooded market of pandemic writers, I needed a sabbatical.

There was no writers-block involved. My mind was awash with ideas, phrases, and themes. Still is.

This was more like my writing skill needed some tinkering the small details to get more people nodding in agreement as they read. Spending seventeen years telling tasting room visitors that their taste in wine is like their taste in music received a constant wave of agreement and understanding. You know what you like and don’t without someone telling you, though the why is certainly discoverable and explainable.

My writing is fulfilling, but it hit an audience wall. It was precisely as if I were a musician that had finished playing a song, and there was no clapping. In fact, due to the pandemic, it was as if there were no audience at all. The phrase ‘the loudest silence’ kept coming to mind.

You expect this when you are an unknown who is writing novels. Your book is a note in a bottle you throw into the sea, and then every morning after, look to see if there is a ship on the horizon.

Friends, family members, supporters who had begged for autographed copies and manuscript drafts suddenly went dark. Silent. No more ‘When’s your next book coming out?’ or ‘How goes your writing?’ kind-of questions. Even the crickets abandoned me. Yet, I was getting great reviews.

Ok. Puzzling, but manageable. If I had been a musician, then my songs were not connecting with my audience. Playing country music in a punk rock bar sort of off. If my written songs had been terrible, I have friends honest enough to take the guitar out of my hands and suggest I take up painting instead. We all need these kinds of friends in our lives.

I needed more practice to improve, and for that, I needed to tinker with the venue.

Read & review writer’s group meetings can be helpful with the significant adjustments to your writer’s skills, but the vast number of genres exemplified around a table can make joining the right group tricky. It is difficult to pick up subtle oboe techniques from a drummer and an accordion player. Still, they can be worth looking into.

The most significant acceleration of my writing skills was from online forum groups with other writers. The garage band of writers is serialized, cooperative writing groups. You play off each other. For me, that needed to include free-flowing, imaginative, story-fied adventures. Jazzy.

For fourteen years, I had written with other Tolkien enthusiasts. These were some damn talented writers, and some of them are still the most cherished, dear friends I’ve ever known, but First Age Tolkien angst, however, had taken its toll. It is as if many Tolkien writers believe they are channeling the dead master themselves, which, like all religions, starts to run into trouble when this guiding spirit inevitably develops different opinions on the same subject.
Instead of a garage band, I was in a classical music symphony club. Any cough or wrong note brought harsh condemnation. Tinkering is not really allowed, much less encouraged.

I found myself joining a Tolkien sub-group of hobbit writers called the Bounders, who were absolutely magnificent, and saved my writing spirit as well as possibly helped save my life. Much like joining Gus Polinski and his polka band in the back of a moving truck, though, this was more a critical ride to a different destination than a new home.

To cross genres into sci-fi and paraphrase Obi, Tolkien writers groups were not the garage band I was looking for.

Stumbling into a writer’s group that harkened to my time writing Star Trek in the 1990s triggered an unexpected rush of energy. The genre was not so specific that it was pure polka and not so stuffy that it was mandated by two -hundred years of classical repetition. Even the individual missions could vary in sub-genre flavor, so it wasn’t always orcs, orcs, orcs.

And so, this Star Trek garage band not only accepted me but welcomed me.

2021 became a year of joyful tinkering. I was having a blast and wrote two novels, one for them and one for me, that will never see the light of day. Because it was practice. To tune this musical simile string even finer, it was like I was now in an apartment practicing songs, and suddenly my neighbors kept telling me in passing how good I sounded through the walls.

Over the holidays, we watched the movie ‘The Man Who Invented Christmas,’ and the last pieces of the sabbatical writer’s puzzle finally fell into place.

Switching to a flashback here for the back-story. In 2016 I began to write seriously, as in professionally serious. I hoped self-publishing novels like they were busker songs might get me noticed faster than endlessly pitching to random publishers. The publishing business was in such flux then, and ‘The Martian’ had gotten noticed this way.

I first fully outlined a set of novels in a series from start to finish and then wrote them in detail. They told the story of wine grapes arriving in France by various methods believed to be historically accurate, but with historical fiction for the characters. I began in Turkey with the Phoenicians and ended in Bordeaux.

Unfortunately, the first and second book drafts lacked a strong female voice. I had to tinker with that before continuing, so I added a book between the two with a female lead to learn the craft better. That was Tynged, and it became the second book in the timeline of the series, pushing Children of Breton to third. My editors well-received both the second and third book drafts. Desperate to get something out into the world, I self-published the second book, Tynged, and the third, Children of Breton, and began re-writing the first book. It’s not like any budding authors get a coming-out party on Amazon without huge ad buys anyways.

Immortalize was my most inspired writing yet, and the story expanded into two novels instead of one. Immortalize, and Immortalize; Ends of the Earth, pushing Tynged and CoB to third and fourth in the series.
But Tynged and Children of Breton had been received as my debut novels by my friends.

Here we arrive back at ‘The Man Who Invented Christmas’ again. I’m no Charles Dickens of a writer, but the answer was I had written two flops, just like his depiction in the movie. Dicken’s Barnaby Rudge may have inspired Edgar Allen Poe, but hardly anyone else. My young girl Gisela in Tynged seems as objectionable as his Nell in The Old Curiosity Shop.

Again, before anyone thinks I’m comparing myself to Dickens or my novels to his great works of timeless art, STOP. What inspired me was how you get back up, dust yourself off, and get back to work.

If you can name one of Pink Floyd’s first seven albums, you are a true fan, but almost everyone knows of their eighth album, Dark Side of the Moon.

It seems you have to keep tinkering with your writing in the right support group.
Welcome back.

“~And if the cloud-bursts,
thunder in your ear~”
“~You shout
and no one seems to hear.~”
“~And if the band you’re in
start’s playing different tunes~”
“I’ll see you on
the dark side of the moon.~”

from “the Adventures of Robin Hood”, 1938, Warner Brothers & Turner Entertainment. 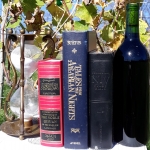